Illustrator Mini Grey is well-known and loved for her highly distinctive style of pictorial story-telling – it’s energetic, colourful and full of witty detail, every bit as appealing to adults as to children. She worked in theatre and schools before studying sequential design at Brighton University, and has acquired a range of skills including puppet-making, welding, carpentry and set design.

When she entered the world of children’s books with The Princess and the Pea and Biscuit Bear, her talent was immediately recognised: she was selected as one of the Booktrust’s Best New Illustrators, going on to win the prestigious Kate Greenaway Medal in 2007 for The Adventures of the Dish and the Spoon.

Her new book, The Greatest Show on Earth, published this month, is a real tour de force – I won’t be at all surprised if it wins Mini the Kate Greenaway Medal for a second time, and I hope it will.

I’d known of Mini’s brilliant books for many years, but it was when I met, walked and talked with her on a youth climate protest in Oxford, and then read her article Fury at the Farm (more about that below), that I realised she’s an animal advocate and environmental campaigner. You can find out more on her blog, Sketching Weakly.

I don’t usually have the chance to meet my guests in person, but for this feature I met Mini, appropriately, in the Museum of Natural History in Oxford. 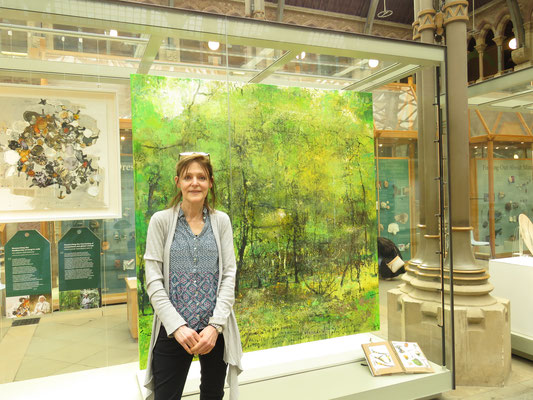 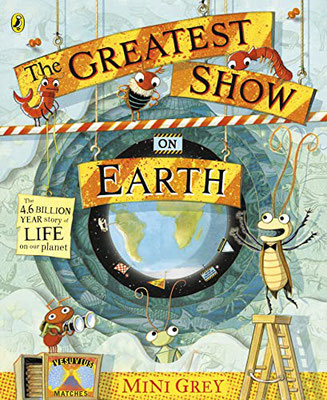 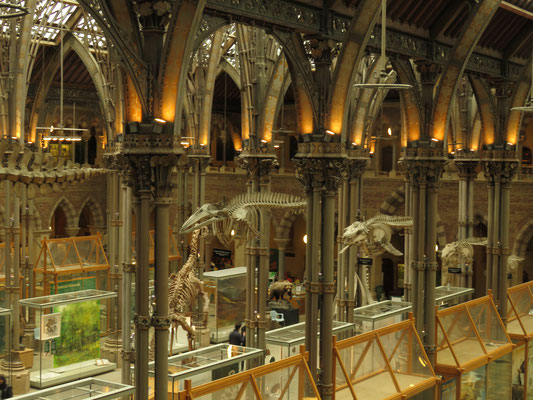 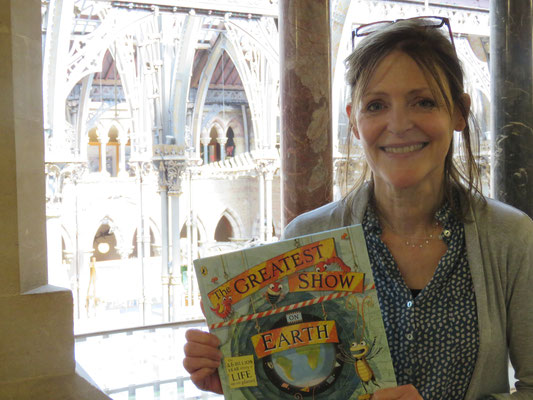 Linda: First of all, congratulations on your wonderful new book! How did the idea come about? How long have you been working on it?

Mini: About ten years! This Museum is a regular haunt for me and my son Herbie. When Herbie was about 5, we began wondering how to understand the concept of 4.6 billion years, the life of the planet, and started making a timeline. Later, Pollock’s Toy Theatre invited various artists to make toy theatres in the Victorian tradition, and with mine I had the idea of insects telling the story of life on Earth. This led to the idea of using the different parts of a theatre: the main stage (the scenes of life evolving), the wings, which give pictorial information, and the orchestra pit, which would be an unrolling tape-measure of time, each centimetre representing one million years. In that scale, it’s astonishing to realise that all of human life occupies less than the final three millimetres! When I made a dummy of a theatre book, my editor saw it and was keen, and it went from there.

Linda: Your books often have an unusual narrative standpoint, and here it’s insects who take us through the vast span of geological time. Why insects?

Mini: That was partly inspired by the great collections of insects – dead and living! – here at the Museum, and I thought of having insects as observers telling the story. Also I wanted to step outside our human point of view, and see what the story of life would look like from an arthropod viewpoint.

Linda: Your article Fury at the Farm looks at the idea most of us have, from childhood, of a picture-book farm: “a random collection of one or a few of several animals living together with a farmer – it’s a kind of animal sanctuary. No-one gets killed. The main danger is usually foxes or wolves. Old MacDonald had a picture book farm. Eee-i-eee-i-oh….”

It’s an excellent article, acknowledging the value of animal stories for the very young, but also stating that “The farm myth in picture books acts as a very useful screen.” It helps create cognitive dissonance about meat, letting people see themselves as animal lovers while ignoring the cruelty behind the meat on their plates. To counter this, you say that “the picture book superpower is to be able to put the reader into the place of someone else … Someone who might be a chicken,” and your story Doris, the Chicken who Changed the World was published in The Puffin Book of Big Dreams.  “You’ll never believe this, I know, but once upon a time, people used to eat animals...”

Have you any plans to write more stories in this vein?

Mini: I think the world need to hear about farming from a chicken’s point of view, and it’s time for a picture book with a brave chicken hero. (hint, hint!)

One of the ideas Mini suggests in that article, and in more detail on her blog, is for food to be properly labelled so that we know what we’re buying in terms of animal welfare and environmental impact. While we talked, we had coffee and cake at the Eat the Future café in the museum, where most of the meal choices are labelled in this way: A for least impact, E for most. Here are the illustrations from Mini's article and one more serious suggestion for food labelling. Food packaging is labelled for calorie content, vitamins, carbohydrates, etc.; shouldn't we also know what our food costs in animal suffering and carbon emissions? 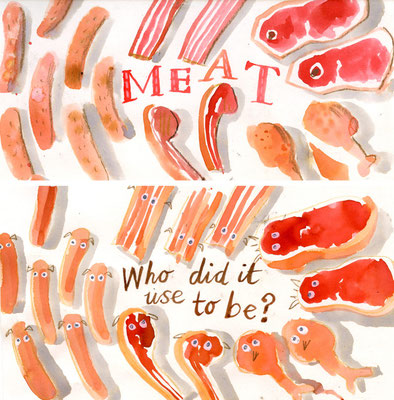 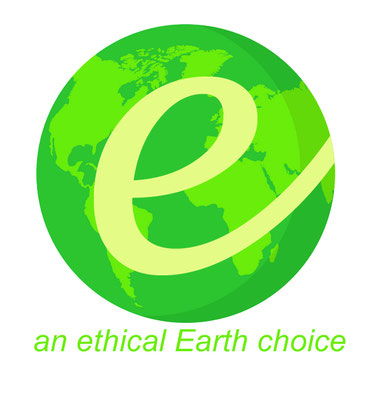 Linda: Your son Herbie (to whom the book is dedicated, as well as to the Museum of Natural History) is now 15. As he’s grown up, how have you found a balance between informing and encouraging responsible choices, on the one hand, and giving a depressing picture of the future of humankind, on the other? With Herbie and his friends, do you see fears for the future / awareness of the situation we’re in / ambition to make things better for their generation?

Mini: I think he does feel that depressing picture of the future, and he has been on a few of the school climate strikes. But I think he’s not that keen to discuss because it’s just misery-inducing.

Linda: Your blog Sketching Weakly is almost a political manifesto – you introduce such detailed ideas for better, greener ways of living. It makes me think that you’d be a great County Councillor, politician or climate advisor!  Have you ever thought of taking part in public life this way? Or do you think you can make more impact through your art and writing, using that ‘picture book superpower”?

Mini: I fear that being a councillor involves a LOT of tasks that aren’t being an eco-warrior. But I think it’s also very difficult for ordinary individuals to stand up to decisions that councils take – especially where to build. I think it’s time, especially in the light of Oxford having declared a climate emergency, to commit to only building in places that have already been built upon or that are biologically bereft. And that would mean not – not to build – as Oxford City are planning – on ancient meadows in the middle of Iffley Village, near my home. Here's the leaflet I've produced about that.

Linda: There’s a lovely post on your blog called If Sketching Weakly Ruled the World in which you find two reasons for hope, both derived from our experience of Covid and lockdown: Firstly, People will step up to a Big Ask, i.e. changing our behaviour quite drastically to meet the urgency of the pandemic, and secondly, People Love Nature – many people relished their local walks by rivers, in parks, etc., and found a new appreciation of the natural world and its wildlife. You ask whether we can use these two things to tackle climate change – and clearly you believe that yes, we can!

Mini: Yes, I decided to try and write a post about what I would do if I was in charge of the world – as a way of finding out if there were a few things that stood out as possible solutions to our planetary problems.

Linda: You had the chance to take part in the Oxford Citizens’ Assembly on Climate Change. What did you take from this? Did the whole experience give you hope?

Mini: Changing behaviour was a theme that came up constantly, and that change is happening, but never fast enough. Some changes are down to individuals, such as changing our energy supplier or heating system, getting an electric vehicle or turning down the heat, but all these would happen faster with a nudge for behaviour change. A price on Carbon is the nudge the world needs. How can we make it easier to do the right thing, and harder to do the wrong thing? Pricing has a big impact on behaviour change.

There was one slot for biodiversity, called ‘Biodiversity and Offsetting’. It added up to a disappointingly brief part of the weekend with very little time to address the subject of using nature to help the causes and impacts of climate change. We need to think long-term, e.g. over the next 100 years, about what we want our local city and landscape to look like. The green areas around cities are the green space that’s the most used and valued of all. With the wider landscape, can we improve it to boost wildlife, sequester more CO2, and hold more water? That would be win-win-win!

Linda: What new projects are on the way?

Mini: Really, getting The Greatest Show into the World!

Linda: Thanks so much for answering my questions – and congratulations today on the publication of this very special book! I’m readers of all ages will love it.

Finally, these panels on Mini's website are so appealing that I couldn't resist including this one, to give you another taste of her distinctive and engaging style.