I couldn't resist returning to my favourite Barbara Vine novel after mentioning it in an interview with Jon Appleton as a book I'd like to have written. I first saw the TV adaptation in 1992, and when I read the novel it was the first of many Barbara Vine books I went on to devour. I've now read many Ruth Rendell titles too, but have always preferred her as Barbara Vine, for the creeping sense of menace, and the way in which ordinary, not particularly ill-intentioned, people become involved in terrible events through their circumstances or obsessions. If you start on a Barbara Vine novel, you'd better have plenty of time at your disposal; she will soon have you thoroughly hooked. Even on a re-reading, knowing the main thrust of the plot and the breathtaking twist at the end, I couldn't put it down.

A FATAL INVERSION, too, has the attraction of being set during the very hot summer of 1976, which I well remember from my student days. The sense of place and atmosphere is particularly powerful here. The 'inversion' of the title refers to Ecalpemos - some place in reverse - the name given by Adam, one of the viewpoint characters, to Wyvis Hall, the Suffolk mansion he  unexpectedly inherits from a grumpy uncle. Intending just to visit and take stock of the place before heading to Greece for the summer, he and a friend, Rufus, decide to stay there in secret. The slightly shabby mansion, its lake and grounds and woodland, seem cut off from ordinary life; the 'drift', the long avenue leading in from the public road, marks this separation. We experience the place as the young men do, freed from studies and parental expectations, with no one to please but themselves: "He and Rufus, like sultans, had reclined on quilts and smoked hashish, the pungent trails of smoke rising into the dark air and mingling with the scents of the summer night"; and also as Adam views it later, remembering that Shiva, who joins them, called it Eden. "The phrase had remained with him, particularly in its darker aspect, the way it appears to most of those who are bound by the puritan ethic, not as a haven to live in and enjoy but as a paradise to be expelled from. It was almost as if a necessary condition of being in this paradise was the commission of some frightful sin or crime that must result in expulsion from it. On the day they had gone, when the summer was over and the skies grey and a wind blowing, he had thought of that image."

The novel moves back and forth in time, starting ten years on from that summer. The current owners of Wyvis Hall, burying their dead spaniel, unearth human bones from the pet cemetery in their pine woods. Inspection reveals these bones to have belonged to a young woman and a baby. When this gruesome find is reported in the press it unsettles, separately, Adam, Rufus, and Shiva, who have never met or communicated since the day they left. Each of them, knowing exactly what happened though with varying degrees of involvement, dreads further investigation. Both Adam and Rufus are now well-established professionals, Rufus a gynaecologist, Adam a computer designer; Rufus fears for his reputation, Adam for his marriage and his baby daughter. Approached by police, Adam unwisely denies having lived at Wyvis Hall that summer, a claim that can easily be disproved by a number of locals: the 'coypu man', the dismissed gardener, the post-girl.

Of course we don't at first know who the young woman might be, nor the baby, but possibilities unfurl as the 'commune' Adam needs to finance his hedonistic summer begins to assemble. With his parents believing he's gone to Greece, he exchanges bits of furniture and other valuable items for cash, to provide wine and cannabis for the long hot nights on the terrace, and petrol for 'Goblander' - Rufus's appropriately-anagrammed old banger. There are girls; first Mary, Rufus's girlfriend, who soon leaves, then two casual pick-ups, and - the one on whom the plot hinges - Zosie, a childlike but sexily appealing waif brought back by Rufus and seemingly with nowhere else to go. Soon Zosie finds dubious ways of providing cash, and goes from being Rufus' lover to Adam's. The 'commune' is completed by Shiva and Vivien, brought there on the recommendation of a mutual friend, and expecting - Vivien especially - a place of spiritual enlightenment and practical self-sufficiency. Earnest, orderly and principled, seeking the stability missing from her childhood, Vivien soon takes charge of domestic arrangements, becoming a mother figure to Zosie.

As each of the three men reluctantly recalls the events of that hot summer, the tragedy unfolds for the reader with awful inevitability. I had forgotten many of the details from my earlier reading, but appreciated this time how cleverly everything is woven into the whole: the 'coypu man'; Vivien's blue dress; Zosie's small gold ring; Uncle Hilbert's shot-gun; Goblander's flat tyre; Vivien's background in a care home that's resulted in her love of children and her career as a nanny. The hints and foreshadowings are all there, hidden in plain sight.

What Vine / Rendell does so successfully is to engross the reader in the lives of characters who aren't particularly likeable. Adam is careless of his good fortune, inconsiderate of others and casually racist towards Shiva, remembering him only as 'the Indian' despite sharing the house for several weeks. Rufus, a medical student, is ambitious and arrogant, treating young women as possessions: when Zosie appeals to him to take her side in a crisis, he responds: "I'll tell you whose side I'm on. Rufus's. And that goes for always.' Zosie, vulnerable and dependent, frequently likened to a small, timid animal, is the one whose actions precipitate catastrophe. Even Shiva, anxious for respectability but too keen to win approval, contributes to the mounting disaster; ten years later he has confided in his wife, but kept this final secret to himself. All three viewpoint characters are tormented by guilt, remorse and the need for self-preservation, in various measures. Not only does Barbara Vine keep you hooked; she makes you feel complicit, caught up in the same tightening mesh as her characters, imagining that you're there in the kitchen on the fateful morning, sharing their dilemma.

Recently, I've read high-profile thrillers that depend on a major plot twist meant to snatch the rug from under the reader's feet. Without exception they have left me feeling dissatisfied, resenting the time I've invested in reading - the cleverness of the twist isn't enough to make up for thin characterisation, implausible motivation or a denouement that falls flat once the revelation has been made. Revisiting this darkly enthralling masterclass has reminded me just how good, how superbly good, Barbara Vine / Ruth Rendell was. That ending, so surprising, so absolutely right ...  well, you'll have to read it for yourself, if you haven't already done so.

I haven't read all the Barbara Vine titles yet, but this one remains at the top of my list, with ASTA'S BOOK, THE BRIMSTONE WEDDING and THE BLOOD DOCTOR as runners-up. If you're a fan too, which is your favourite, and why? 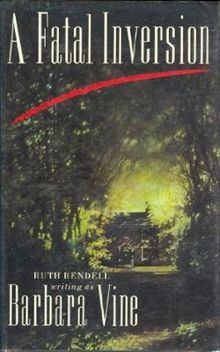 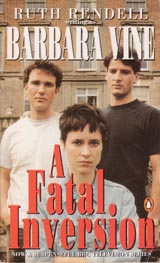 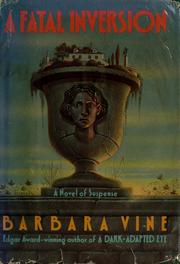 The middle cover shows Douglas Hodge as Adam, Jeremy Northam as Rufus, and Saira Todd as Zosie in the BBC adapation.

For the Guardian obituary of Ruth Rendell, click here.